Four days to make a lap quilt for my brother and sister-in-law...  What a disaster!  Narcolepsy and deadlines DON'T mix.

I thought I was well prepared having picked a lovely quilt pattern and cut up all my fabric accordingly. 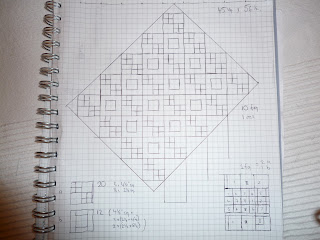 I got off to a great start and put all the blocks together. If only I hadn't been so set on making a deadline i might have noticed before I'd actually sewn together every single block, but things did not look good!  The overall look wasn't Beatles/peace/psychedelia it was more like a full volume bad trip! 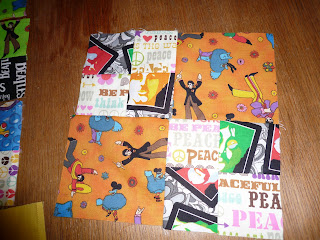 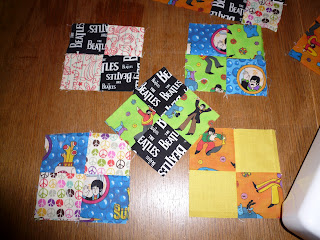 The fabrics I'd chosen were all great, and they had their common theme like i wanted.  But they didn't go together tonally at all.  I'd like to think I knew that at the beginning but i think I was just so hooked on the theme I wanted that I hadn't really thought it all out enough.  Monkey and Rocket boy were two piles of fabric in my stash that I spent months and months waiting for the right fabric to tie in with them.  Ahhh the blissful hours trawling fabric shops online...  I'd also spent months going through quilt patterns looking for something that I could picture with them.
Not that I just threw this one together or anything, I had been planning the theme and choosing fabrics for it since October.   But still, more time would have helped me see things a bit better.


I loved the plain patches, a 4" patterned square framed in 2" white border.  So, with 3 days to go I decided to unpick all the four square patches and replace the fussy wee squares with a plain white square.  However after such a productive day on Monday, I was pretty wiped out on Tuesday.  I guessed the unpicking would take a couple of hours, but what with falling asleep every hour or so it ended up being 10 am to 4 pm.  Fortunately I had a really good nap at the end of it, and was able to put in 2 hours in the evening doing the patches with the white squares.


Wednesday was such a totally crap day for many reasons I wont bore you with. However, after many naps I eventually had a nap that actually felt like it did some good so I went back to the quilt.  I put the top together in no time at all.  At this point I realised that in using white squares I'd basically "disappeared" the entire quilt pattern...  Doh!  Well, I had one evening and one whole day left.  I decided then and there that how ever imperfect I felt the quilt had become, it didn't look bad, and I wanted to give my brother and sister-in-law a handmade present so much.  So, a few coffees and some of my medication and I got 70% of the quilting done.


A word about the "medication".  Does it help?  50% of the time it helps me concentrate better, but it doesn't stop me falling asleep or feeling tired, and 50% of the time it does no good at all.  100% of the time it leaves me extremely tense, and the following day (or days) I'm worse than ever.  Needless to say I only take it once in a blue moon.  But I am allowed to keep some to take when I feel it is necessary.  Its basically an amphetamine that a normal person would take a version of (illegally) to be super hyped up and out of their box.  Even at the highest dose it still barely has an effect on me!!  And like all the medications available for Narcolepsy, it doesn't cure it, it doesn't stop it, it simply masks some of it a little, and delays it for a little while...  Which is why on a normal day to day basis there is no medication that works for me.  All Narcoleptics are different though, and for some it helps a great deal.  Just not for me...


A word about the quilting...  I picked some super soft cuddly fleece for the back.  This is a lap quilt for two to snuggle up together under and watch movies!  I'd never used fleece before so I had done a couple of wee 6" trials, one with batting, one without.  I preferred the one with.  Quilting the trial piece had been a dream, it slipped through the machine no problems, and it stayed in position with very little basting.  Sodding typical that the actual quilt was another story all together!  Oh man it was a nightmare.  It slipped, it stuck, it wouldn't go through the machine one minute and flew through the next, and it puckered, badly...  The one thing fluffy fleece had going for it was that the puckers aren't as noticeable as on cotton, and the stitching on the back is relatively hidden.  With one day left it was a case of "I've started so I'll finish"...


Thursday was fun.  Okay, so that's a bit of a fib.  I finished the quilting and made the binding all by 3pm with naps,  so I was pretty pleased with myself.  All I had to do was stitch the binding, but the fact that I couldn't stay awake for more than an hour really really took its toll.  You see when I'm having a bad day, its one thing doing a task that involves lots of little different jobs, but when it comes to doing one thing for ages its nigh on impossible.  Though on a good day a big job is a pleasure and lots of little different jobs exhausts me!


I got it finished eventually, but I wont tell you what time in the morning it was... 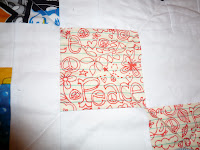 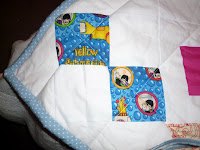 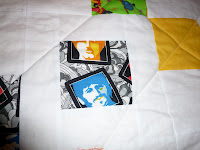 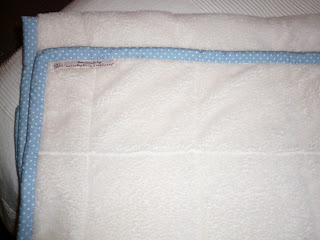 So.  Its done.  Its wrapped up and posted in time, but with a little note promising them another, better, puck-up free quilt at a later date next year, but with NO DEADLINES!!!
Posted by Sarah on 11.12.10