Now didn't I tell you I was stubborn?!  I've been working on list stuff, no deviating so far, and I have my first finish! 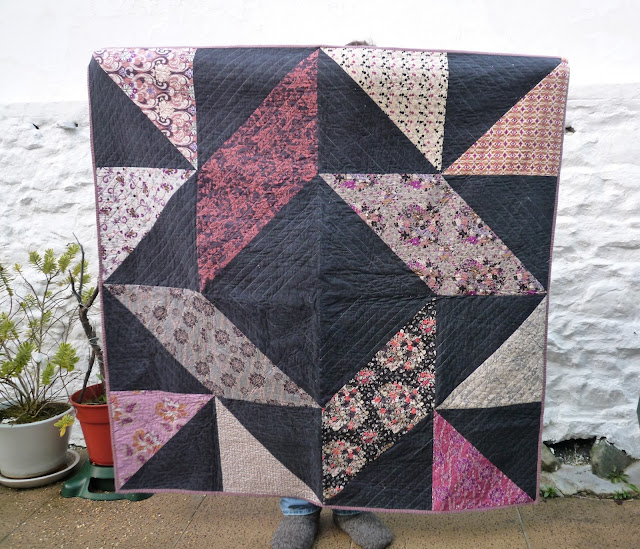 Its my Rock 'n' Romance 16 block, part two.  The first was a giant star in January.  This was supposed to be another giant star, but I'm afraid I just hate doing the same thing twice, so I played around with the HST's and liked this layout for something different.

The quilting for this one also had to be different, and for some reason it was a total pain in the ass!!  Sorry, but this one just really upset me.  It just kept going wrong.  Again and again.  And the quilting here looks much simpler than on the giant star too, so I do not understand it.  Its just one of those things I suppose.  Maybe the sewing machine didnt like it... 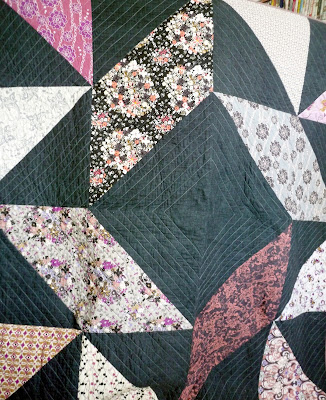 So, it was a  bit of a trial, but I got it finished eventually, and after a 2 hour drive around looking for a nice quilt photo location, I am having to make do with the back yard again.  Well, it might have looked like a beautiful day, but if I'd taken the quilt out of the car I'm pretty sure it would be half way to Norway by now...

One finish down, another two are imminent!  I have 2 cushion tops sitting patiently waiting for backs.  I will be sooo much cheerier about my sewing when they are done.  Fingers crossed for next week!  Its zipper fear again.  I've proved I can do it so I dont know why I'm procrastinating but the thought of them is just putting me off...  Tomorrow is the day I think.  Well, I'll start the backs tomorrow anyway....  Honest.

Ooh one more thing, just incase you havent heard, Emily of Strawberry Patch is offering a new basting service!  CLICK HERE for more details.  Basting sucks.  Seriously, someone tell me they enjoy doing it...  No?  Didnt think so!  Bending over, crawling about, taping, stitching, pinning, spraying - eugh.  Back breaking.  And that's all if you are lucky enough to have space for doing it!  For a very reasonable price, lovely Emily can baste for you.  Just thought I'd pass it on!