Guess what....  I actually had a pretty good weeks sewing!  Not too much sleepiness, not too many disasters.  First of all I got the 20" cushion cover for the "For the Love of Solids" Swap done. 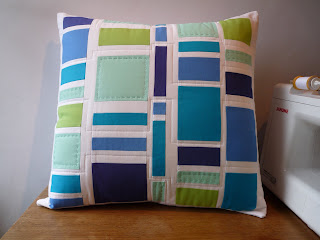 I also had a go at the zipper pouch mark II. 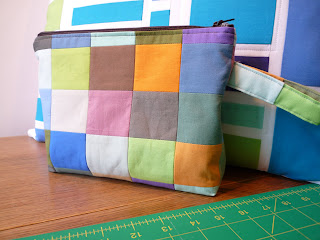 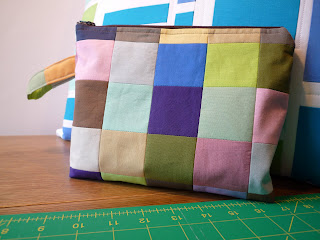 From last weeks post I can deduce the following  - Adjustable zipper and piping foot is not a particularly popular foot, or at least no one that wanted to comment had one!  But I did get loads of kind comments, encouragement, and zipper hints and tips :-)  Thank you all.  I did some rooting around in the cupboard and found the old "normal" zipper foot, so I had a go at using that one.  Hmm.  Apparently I just suck at zippers.  I'm guessing it is something that is just going to require a whole lot of practice!
However, cushion and pouch are packaged up and ready to go off to my swap partner, I hope she likes them!
I got my partners assigned to me for Cindy's Mug Rug and Goodies Swap too, so it looks like I finished just in time...got a whole lotta thinking to be thunk.

Also, I'm a contender!  Check out lovely Sarah @ pings and needles Japanese scrap bag competition :-)  I'm thrilled to get in to round 2, some of the other contenders suggestions are soooo cool!  Japanese scraps fluffy muff anyone?!  Love it!   I wont be asking you to vote for me though - you may have noticed, I'm up against one of my best bloggy buddies - Hadley of Flying Blind on a space rocket or whatever ;-)  We all know that gals gonna come up with something pretty awesome!
There are sooo many QAL's going on at the moment.  Across the sea, Log Jam, Dead Simple, Hex-along ...I've been sorely tempted to sign up to all of them...  However, I know when I've got too much on my plate, and lets just say I've got a whopper of a serving platter never mind a plate at the moment.  The only one I am taking part in (officially) is the Hex-along, and this is how I'm getting on so far. 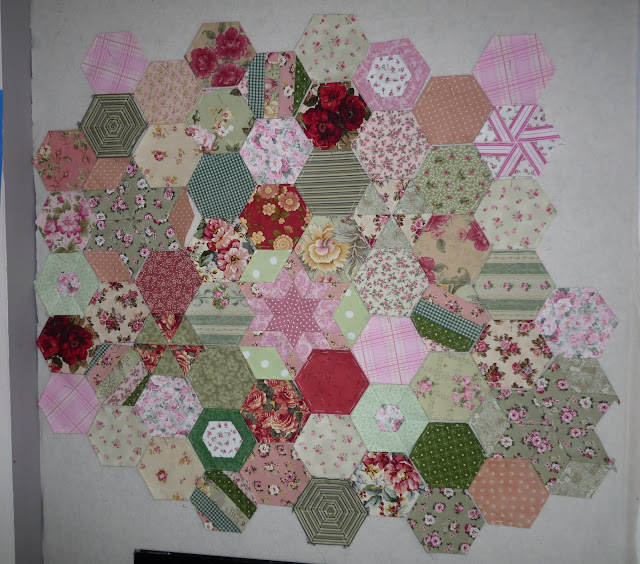 Got rather a lot more to do methinks!  I am really loving having a little project to do downstairs though - its perfect for when I think I'm a bit too tired for going up to the cupboard.  Not that that has been an issue this week, I've been up there all the time and it is so good to be able to say that for a change!  Despite having a "next I'm going to" list that's stretching off into eternity at the moment, I somehow ended up doing this... 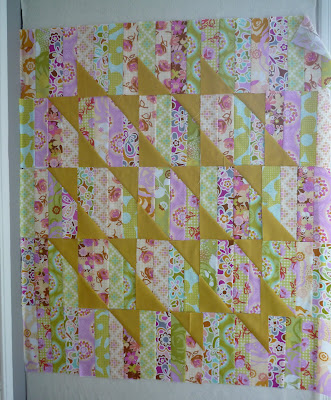 It was on the list, just not even near the top ten.  I guess I just felt like joining some strips together!  Shame I didn't feel like reading my own instructions though... I found out one morning I'd cut 70 out of 100 strips too short!  Fortunately it was my own design, so I don't feel too bad about it, and I'll just re-jig the design to make my shorter strips fit.  Well, wouldn't you rather trim 30 shorter than re cut 70 the right size?!  You'll have to forgive the bad photos again I'm afraid, its not been particularly light up here recently, but its not been quite dark enough for the flash to work well either!  You'd not believe it looking at the picture, but in daylight / artificial light that solid does not stand out as much as it looks like it does in the photo.  In fact, in daylight I was worried the solid was so close that you'd not really notice the stars it took me hours and hours to get right...     I guess judging by the photo that should no longer concern me!  Bonus ;-)

I'm linking this up to Sew Modern Monday @Canoe Ridge Creations (whilst there's still a couple of hours of Monday left!).  Pop over to have a look at lots of other lovely creations going on in the blogiverse, and check out the fantastically retro vibe of Megan's Weekender Bag!  Love it :-)
Posted by Sarah on 29.8.11 19 comments:

I should zip it.

Sorry I skipped a week of blogging.  I'd only made one thing, and I'd forgotten to take photos of it before I sent it off...  You can see it here though!  I've also been a bit of a misery guts so less said on that the better!
Its been a pretty sleepy couple of weeks for me.  I did have a couple of awake days last weekend, but I had to use them  for housework!  Well, it had kinda built up, and no, I don't like housework, but I don't like a totally messy house either.  (boyfriend if you're reading this, stop choking with disbelief...)  So, I ended up using the only awake days I had getting the house in order.  But at least it was nice to nap in a very tidy house. (boyfriend, again, if you're reading this - its even nicer napping in a very tidy house you've cleaned for me...come home soon!)

I have done little bits and pieces of sewing though, mostly in the last couple of days.  I'm in the "For the Love of Solids" swap, and getting something done for that has been top priority.  I don't know why but I really haven't been feeling like it much!  I kept thinking that one day I'd get a good idea I actually felt excited about, but its gotten to the stage that I need to have something done, whether I get really excited about it or not.  I've tried really hard to come up with something my partner will like, but lets just say I'm not entirely confident about it!
Its going to be a cushion cover by the way. 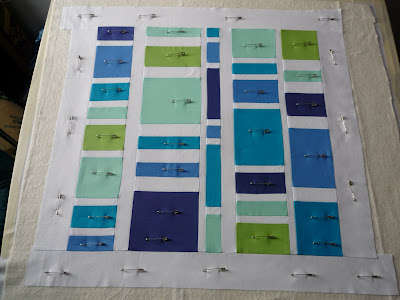 The colours are genuinely much nicer than they look here, the blues are brighter, the green is not as dark and murky as it looks here.  Bad lighting, honest ;-)
In between doing that I've been playing about a bit... 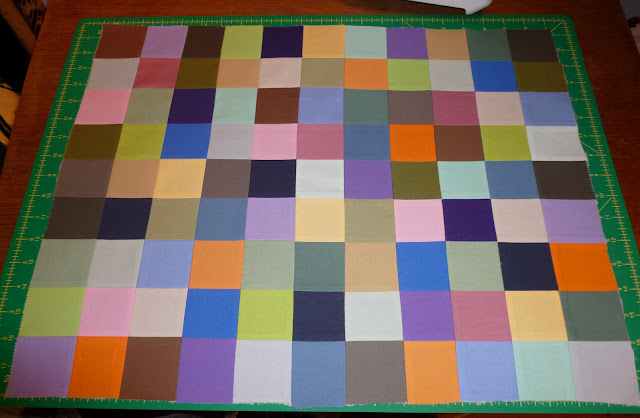 Now this I am excited about...  This panel here had a purpose, more of that in a minute, but this panel has made me want to do this bigger - 4" squares instead of 2" and a whole quilt of...  cos I just didn't have enough on my "next I want to make" list...   However, this panel is now this! 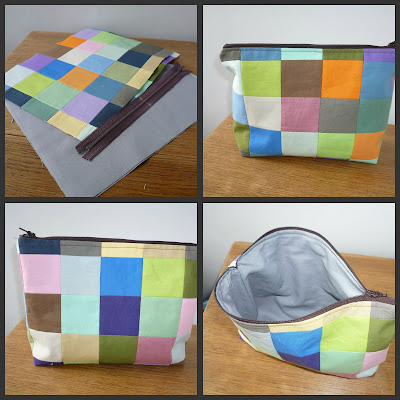 My first attempt at a zippered pouch.  I have now sewn a zipper 3 times - as a bag closure, as an internal pocket, and this zippy pouch.  I still suck at zips.  I've got another pouch to make up so I'll be having another go right away, but I'm kind of stuck at what to do differently.  I've studied every tutorial I can find, and I still don't feel confident with it.  This is my main reason why. 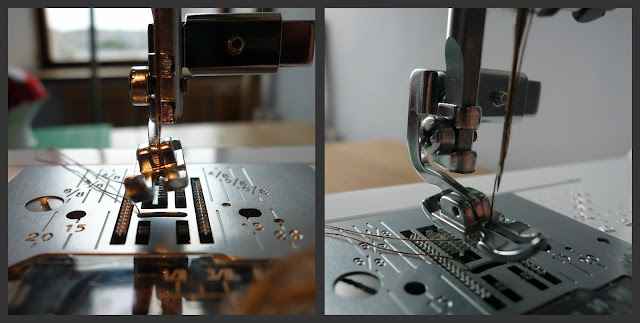 The zipper foot.  I hate it!  Don't know if you can see from the pics but it has a half circle on either side, and a teeny gap in the middle.  I've tried the needle positioned in all three ways.  None seem to make sense to me!
If you can see it, the foot is angled too.  I swear I tried it three ways and none of them worked right.  Needle on the left and the top fabric got stretched out of proportion.  Needle in the middle and it was not close enough to the zipper.  Needle on the right and, well, I might as well have been doing free motion it was skidding about all over the shop.  Does anyone have a foot like this?  How am I supposed to be using it?!!

Ach well, pouch mark 1 is passable, it wont fall apart, it zips up.  And I've pre cut the pieces for mark 2, cos I knew if I didn't I'd just postpone trying again!  I WILL do this.  But if anyones got some zipper foot secrets to share, please do...

I'm linking up with Sew Modern Monday @ Canoe Ridge Creations  so have a nosey there at all the gorgeous projects others have on the go!
Posted by Sarah on 21.8.11 30 comments:

wordless.. (believe it or not!)

Got a bit of a memory test for you!  Remember this?

I rescued it from its spot in the WIP tray where its been lurking for months and got my butt down to the Local Quilt Shop to get it basted the other week.  Here's a pic of it on the super big table they have, just to prove I did actually leave the house... 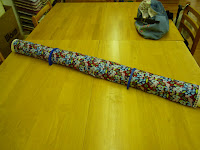 I had been a bit nervous about doing the basting in a shop - customers coming in, people nosing at it, what if they tried to talk to me? etc.  A lot of my lovely readers gave me quite the boot up the backside, figuratively speaking of course, and told me to just go and do it.  So, I did.  And, no, it wasn't so bad!  Well, fortunately the LQS lady had her 7 year old daughter in the shop with her, so I spent most of the morning chatting to her!  Yeah, conversation with a 7 yr old is a bit more my level... lol
This week I got said quilt quilted.  Turns out my basting on a wonderfully large flat table is not any better than on a small bouncy mattress...  Oh I don't know what I did, or didn't do, but once I'd sat and happily done the horizontal "straight" lines I had a look and, well, it certainly wasn't going to stand up to getting vertical lines too.    However, rather than be discouraged by yet another basting turkey (geddit?!) I decided just to leave it at the horizontal lines and do a bit of hand quilting detailing.  Whaddya think? 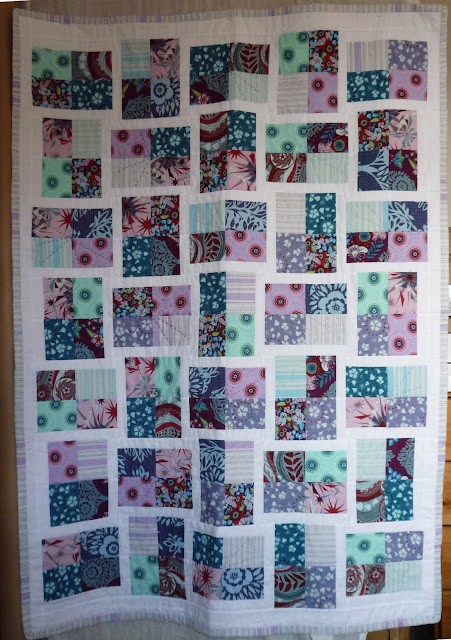 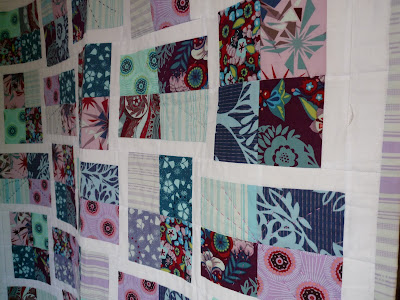 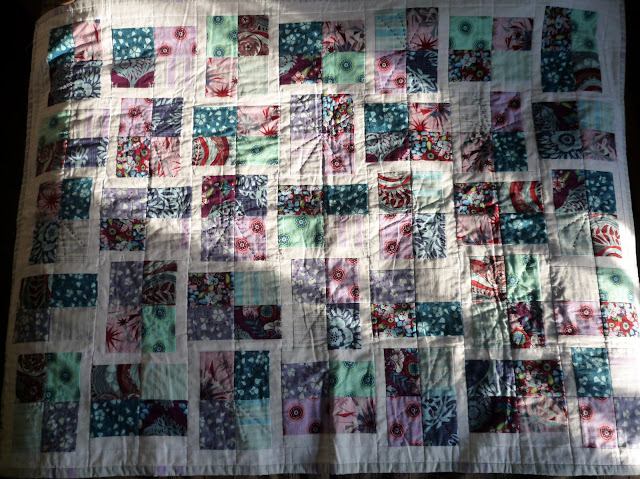 This last pic maybe isn't the best, but it does show up a bit more of the hand quilting.  What is more, I loved the way the last of the evenings sun was streaming through the window (it showed up a bit late, but rather that than not at all).  It seemed too nice an opportunity to miss so I got Dorothy out again and took a photy of it too :-)  Hope you dont mind! 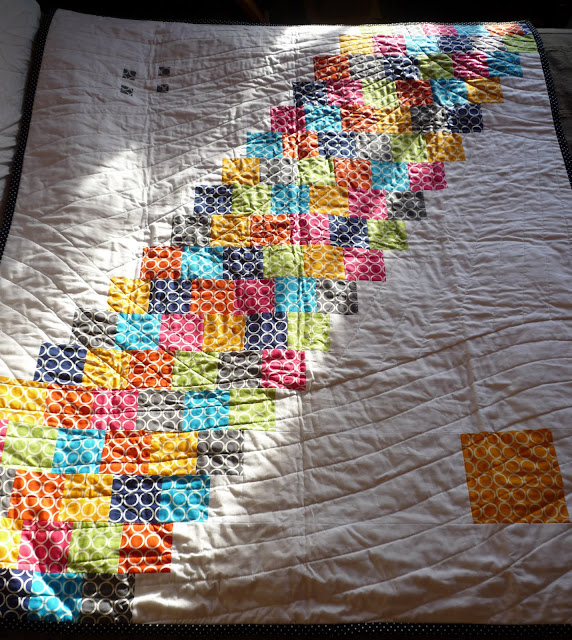 All this week as I've been sat on the sofa playing with my Perle cotton on Innocent Quilt, I've been wondering if there was anything I could or should do with Dorothy to maybe improve it a bit.  I've not come up with anything as yet.  But looking at it in the sunlight, seeing the quaint quilting showing up more, I'm not sure whether or not it needs anything else!  I am open to suggestions though if you think there's something missing from it...

I've not much news this week, its been a very quiet, but rather pleasant, week of hand sewing - me, Doris Day movies, cups of tea, and occasionally (when she could drag herself off the new bathroom floor - I've lost my little shadow to heated tiles) little Ellicat.  I've steered clear of the kitchen, except for tea and ready meals...  Not so tasty, but relatively disaster free.
So, with no stories to add this time I'll leave you with my hexie progress! 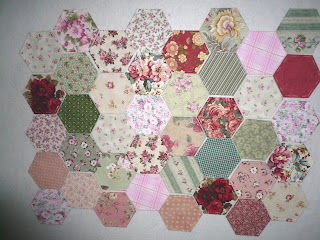 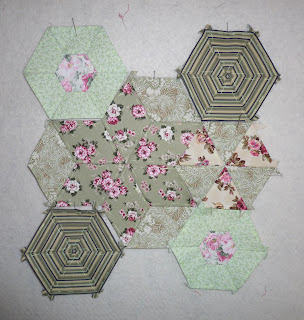