Rocket boy, or how I learned to loathe triangles...

Pob Doll was posted at the weekend, and I hate to say it but I almost shed a tear.  Well, it was meant to be a representation of my brother after all, and he only emigrated in March...  And I do miss him a lot.

In the mean time I've been busy piecing together the second of the mini quilts I'm making for Christmas.  Okay so I haven't actually quilted the first one, Monkey Quilt, yet but I did get round to basting it today...  With a little help from my man pulling it taut for me.  I tried out the basting spray, which I'm not at all convinced with so I tried out the basting gun as well!  (almost half price on Cotton Patch right now, I couldn't resist..)  I'll see how it all pans out tomorrow when I finally get round to some machine quilting.

Anyway. Rocket Boy Quilt.  I used a layout of HST (half square triangles), lots of big triangles to make the most of the fabby retro rocket boy fabric (Michael Miller fabric, which I love...).  In amongst these I'm putting a few triangles made of smaller triangles, using some stars fabric, and a little of Michael Miller "Dick & Jane" fabric range.  Its my first time doing triangles, all my previous attempts at quilting have been square based.  Time to be a bit more adventurous... 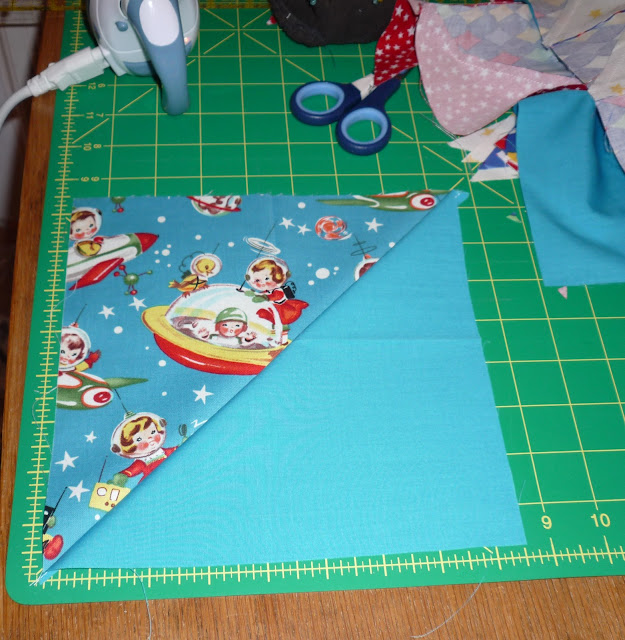 The large triangles went swimmingly well, got them all done in one evening.  The smaller triangles however...
I spent an evening cutting out all the smallest triangles I needed.  Then pieced the first group. 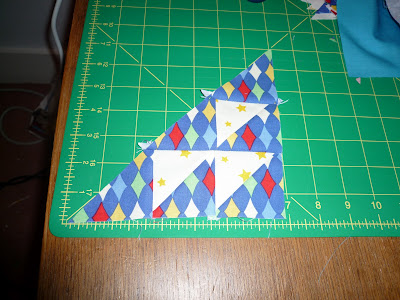 Waaaaaaaay to small.  Sod it.  There must be a formula for working with triangles that I don't know about.  It clearly isn't the same as squares...  Of course when I saw it all together I realised that of course I'd cut them far too small, and of course you would lose a lot more fabric in the seams than with squares.  But I clearly didn't put enough thought into it before cutting.  Oh well.  Mistake made, lesson learned. 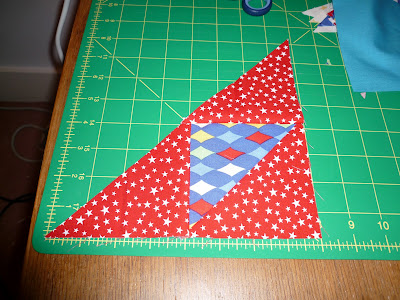 Or so I thought.  Either my narcolepsy was kicking in and my concentration and short term memory were shot, or I was just particularly stupid, but I did exactly the same thing the following evening.   I think it was narcolepsy...  Not that I don't think I'm capable of utter stupidity.  But that particular days sewing had started with me sitting down at the machine and waking up face down on the table 20 minutes later.  Then doing it again.  This time with drool.  So, might not really have been in the right frame of mind to cut more triangles.
After a day off spent sleeping every time I sat down, I went back to it and finally got it right. 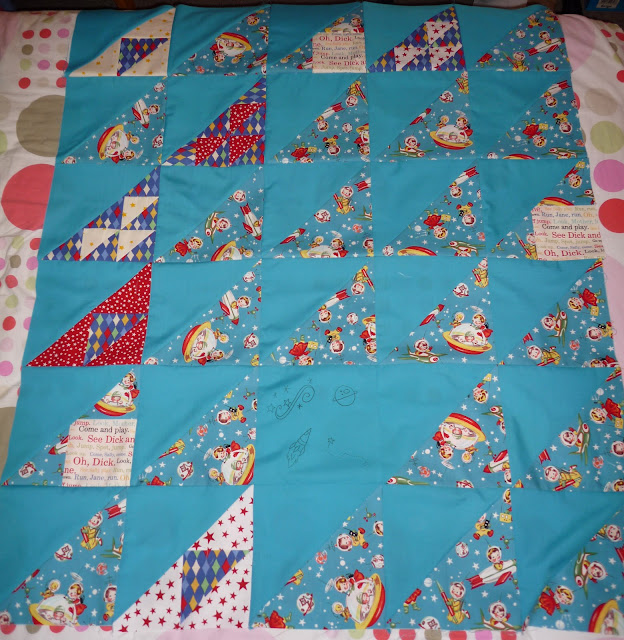 CONFESSION:  I did not come up with this design off the top of my head, it was inspired by (or copied from, but not intentionally) a beautiful quilt by a wonderful quilt designer Red Pepper Quilts .   I hope I dont get into trouble as I really did think I'd thought of it but I was browsing Red Pepper Quilts the other night and I saw her "urban circus" quilt and thought..."bugger. might have known it was something I'd seen before, it was way too cool for me..."  However its not for sale its a gift, and I promise I wont do it again...
Actually I should also point out that Monkey Quilt is based on Red Pepper Quilts "bricks and stones" but I did pay for that pattern! 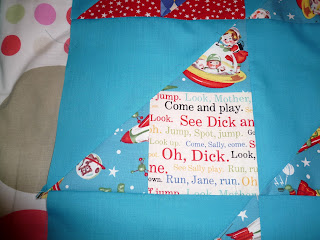 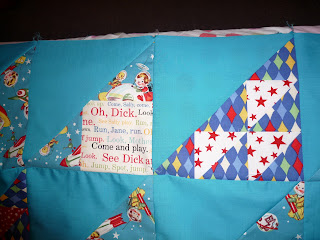 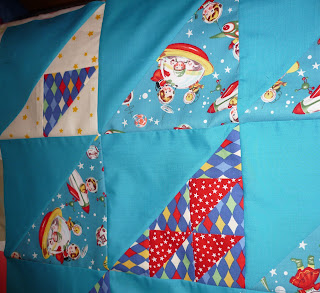 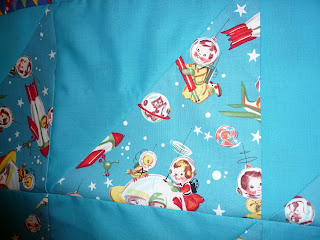 The 99% is due to this little square which I'm going to embroider. 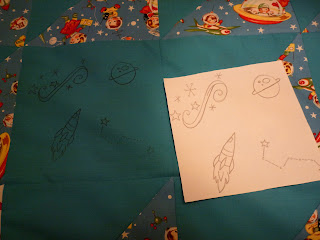 I also set up another project for doing in front of the telly...  From denim mini (no not mine, my ass hasn't been that small in decades) to shoulder bag.  With a bit of embroidery on it of course. 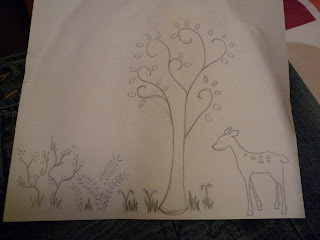 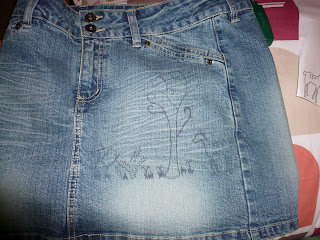 Here's one I made earlier... 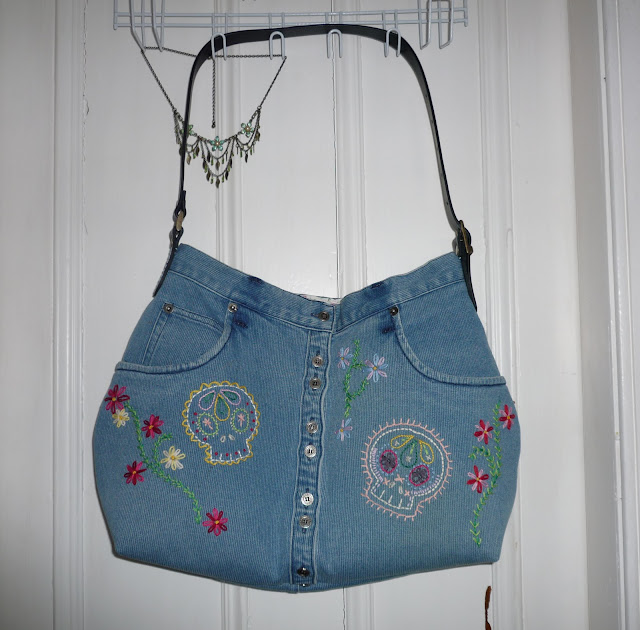 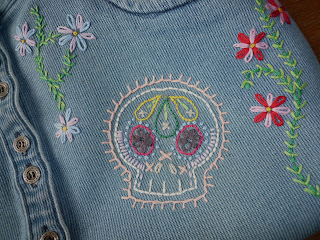 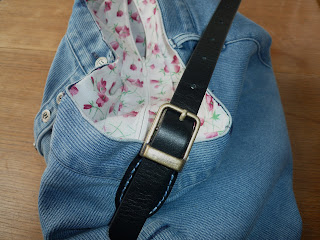 Its been a long job, but I must say a thoroughly enjoyable one; finally Pob doll is complete! 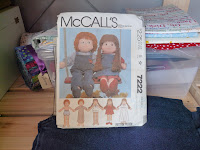 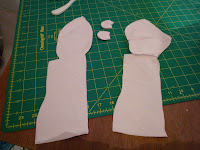 This is the original pattern.  I have loads of doll patterns, but I just cant stop making this one, I love it!  Probably because this is what mum used to make dolls for me when I was wee...  That and I just love the face, no other doll patterns amuse me as much!  To make Pob doll I needed to give him a big nose.. 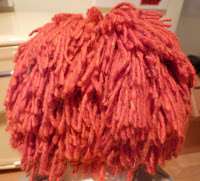 The hair was a little trickier than usual, my fault though.  I just HAD to use this tweed wool & mohair mix because it was the perfect colour for red head Pob.  Unfortunately it was a bugger to sew with and kept breaking if I tugged, and as some bits were thicker than others it needed a good old tug.  Its also thinner than the stuff I usually used, so I had a lot more hair to sew on than normal!  Being a tweedy wool its also ever so slightly oily, so it kind of sticks to its self as opposed to fluffing out and covering the "scalp".  So, again, lots more hair to sew on! 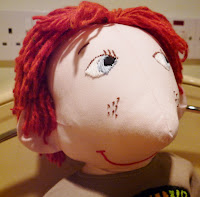 I do think it worked out okay in the end though.
Making the clothes is always the most fun part of the doll.  Pob doll had to be scruffy indie student, so one of my favourite tshirt logos was the Happy Mondays "Madchester".  My other favourite was the inspiral carpets Moo cow, but for embroidery I went with Madchester for its bold colours and easy stitching...  Okay, so I've probably broken some copyright law somewhere, but its a one off, its not being sold or anything...
One printer, one iron on transfer pen, some interfacing, embroidery floss and here you go.  (note for future - iron on transfer pen v.v. effective, ironing board cover should be protected...) 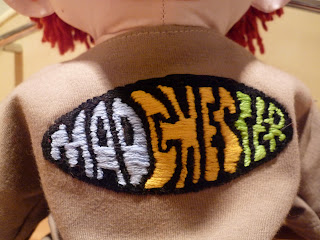 Next up, the jeans.  I couldn't find an old pair of light washed out denim, so had to make do with what I had.  I did have a go at "aging" the jeans...  cheese grater, bleach and a toothbrush, then a couple of tumble dries.. 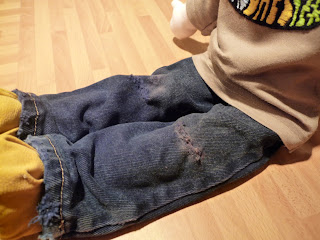 Footwear...  Hate doing doll shoes.  These are my attempt at dessie boots... 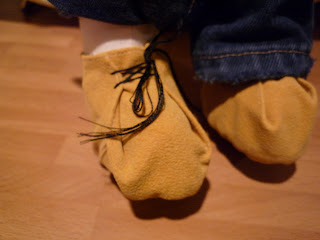 Not too impressed with how they turned out, but I was completely out of ideas.

Last but not least, the first of my own wee labels...  Ellie cat features too.. 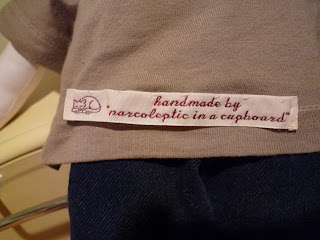 Anyway.  Job done!  One Pob doll on its way to a students reunion weekend...  Hope he survives... 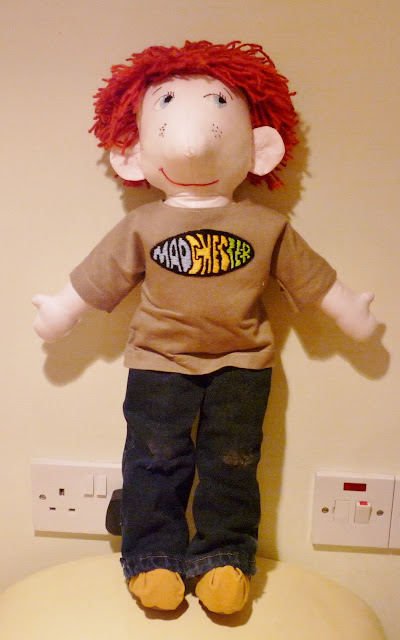 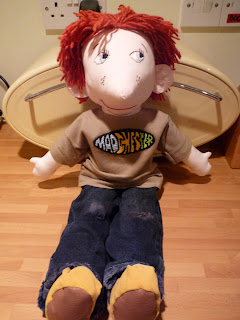 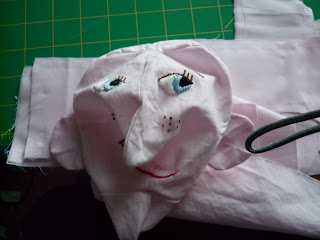 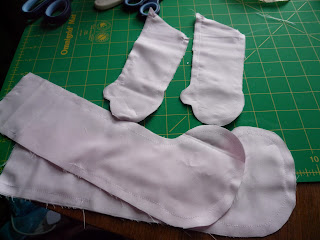 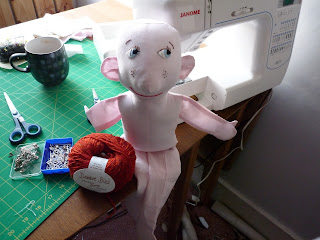 Then stuffed it....
Now I have a mass of red hair to sew on the head... Then I'll finish the stuffing, stitch him up, and make some clothes for him.
Still a way to go yet!  In hindsight I made the features of the face too big.  And the ears a maybe a bit low.  And do the french knots really look like freckles?  Hopefully the hair will make a big difference...  frankly right now he looks pretty freaky!
﻿
﻿
Posted by Sarah on 9.11.10 3 comments: