A long long time ago I signed up with Sarah @ Fairy Face designs to have a Winter Stitching List, and try and accomplish my goals over the winter months.
We had the mid season update, which the photos on the left were featured on.  To summarise, (the post is here) and the things I DIDNT manage were as follows.  Table runner for me, my own Bee quilt, quilt for bestie's baby, work out how to quilt "not so hidden stars", 5" charms top, and more hexies.  Hmmm, read the post, it didnt sound as bad as that summary just did!  Also, I pledged not to join in on any more swaps or QAL's and stuff til I got it all done...

Didnt do too well with that addition at all really.  I started my own QAL......  I also took part in the For the Love of Solids Swap 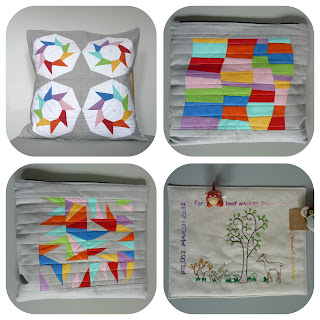 And am taking part in the name tag swap for Fat Quarterly Retreat.

However, list wise, I did get round to sorting out the quilting of the "not so hidden stars" top.  Its just not entirely finished yet!  I did Free Motion Quilting (my first time on a quilt) and some hand stitching in some of the stars. 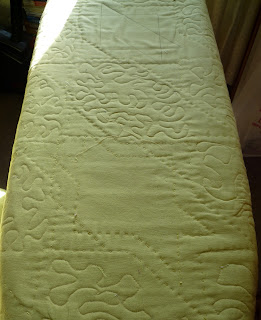 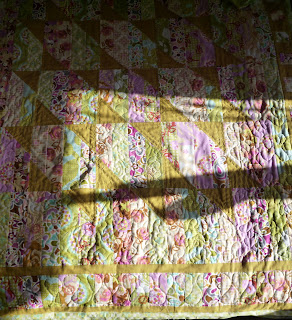 One more star to hand stitch.  Hmmm.  Quilting looks a bit dubious really... but not entirely bad for a first time.  Actually have the binding sewn on already, so when the hand quilting is done I just need to hand stitch binding to front and hey presto - one utterly manky, dusty, cat hair covered, been in use daily since I signed up for winter sitching quilt, finally ready to wash! 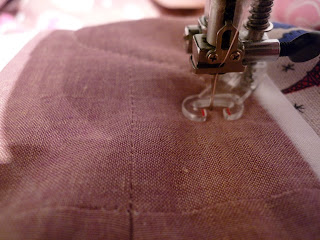 The quilt for bestie and her baby is progressing.  Slowly.  In a two steps forward five steps back sort of a manor.  I was half way through quilting it when I noticed that the tension had gone and on the back the top stitches were massive big baggy loops.  Bit annoyed, but then I started retracing it to find out when that had started.  Wouldnt you know it, after about the first 2 inches of quilting...  So, that has been completely unpicked.  I'm wondering if its the thread.  Its Gutterman Quilting thread, which I've used before with no problems, however its never done this before either... 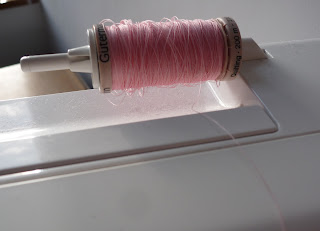 So with those two "almost"s,  no more hexies done, the 5" charms top closer to reverting to a bunch of 5" charms than progressing to a quilt, my own bee quilt still in scraps and pieces all over the spare room and the cupboard, one might think that there's been very little sewing done in the cupboard this winter at all really....  But I disagree.  None of these were on that list! 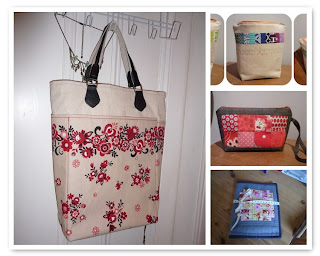 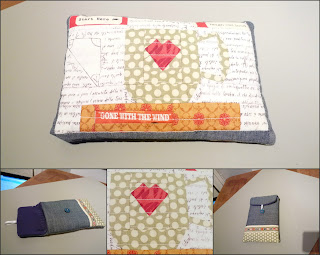 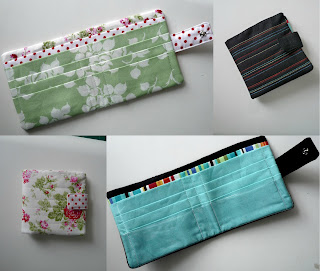 So maybe not a list with everything neatly crossed off, but I've had fun, and I've done the best I could.
Now I dont know about you but my eyes are desperate to close and I've come close to snoring twice now so I'll stop for now...
Ooops, have to link up to Sarah at Fairy Face Designs!!  Now that I've stayed awake an extra five minutes or so, you should too - so go check out how everyone else got on!
Posted by Sarah on 29.4.12 26 comments:

A massive big thank you to all you lovely people who voted for my quilt on the Quilters Gallery Weekly Contest!
No fabric funds I'm afraid, but it did so incredibly well I cant get over it.  I came 3rd in the end, but I'm still gobsmacked that it was 5th on the first morning of votes!  Wow.

The voting spree is not quite over yet though....  Whilst I try and sort out my Winter Stitching Finale post, I'd really love to share this wonderful quilt with you, and ask that if you havent already, could you pop over HERE and vote for it??
This is the constellation quilt, Hadley from Flying Blind on a Rocket Cycle assigned us as blocks for her month in Brit Bee.  Its an absolute beauty!!

Right, I'm off to get back to trying to sort out other posts and finishing other little bits and bobs.  Will be back soon!
Thanks again x
Posted by Sarah on 24.4.12 16 comments: 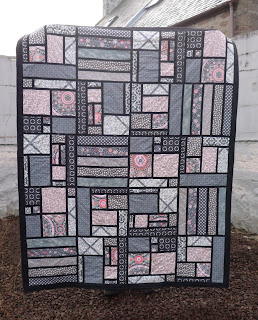 In a really weird moment of madness last week I entered my Stained Pink quilt in the quilting Gallery weekly competition...  I think it may have had something to do with the prize of a fabric voucher and my distinct lack of Flea Market Fancy....  (my wishlists and hints seem to be falling on deaf ears ;-)

Anyway.... If you would like to view the competition entries, there are still a few hours left to vote (closes 11.59pm).  Not that you have to vote for me...  but my FMF free stash would really really appreciate it...
CLICK HERE TO GO TO THE VOTING...
Posted by Sarah on 22.4.12 23 comments:

As a lot of you will know, I'm lucky enough to be part of Brit Bee.  Now, I'm ashamed to say I've been horribly behind with my bee blocks since February.  I dont know what happened, I just, well, kind of stalled on one block.

Ceri of Inspired by Felix challenged us with paper piecing!  The request was for "food and or drink, paper pieced".  Now, I had a big advantage here as I've been nattering to Ceri on the phone a fair bit, so I had a very clear idea in my head of what she was after and what she might like...  So I really went to town and it was SO. MUCH. FUN!!!


Jennie of Just a Little Stitch asked us all to do a self portrait.  Massively adventurous, very challenging, but, oh dear - me? On fabric?   I dont like looking in the mirror.  Surprisingly enough I hardly have any photos of myself.   So, that was a big challenge for me to begin with! If I'd been doing anyone else I'd have been fine... but I didnt want to be the only brit bee to completely wimp out and not appear in person.  I'm not going to go into all the details, but eventually I got someone else to help me alter a photo to limit the colours, I printed the photo on fabric, and I decorated the block.  I'm a bit disappointed with myself that I didnt come up with something more creative, but after 2 whole months of worrying about it and struggling, I decided that I should stop being such an arse and just get something done.  So here it is.


Finally (for now!)  Jo of A Life in Lists gave us some gorgeous Heather Ross fabrics and asked for blocks with the theme of "Circles".  This was another first for me, but one I've been dying to try for some time, so I really enjoyed it.

So, with all this trying new things, expanding my skills, challenging myself, what else has been going on? 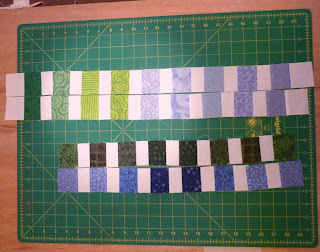 Just a healthy little reminder that I still cant do a simple quarter inch seam.....  D'oh!!!

Happy Easter! Have some cake...


Well, this post is going to be mostly photos you've already seen, so I thought our Easter cake would at least be different.... 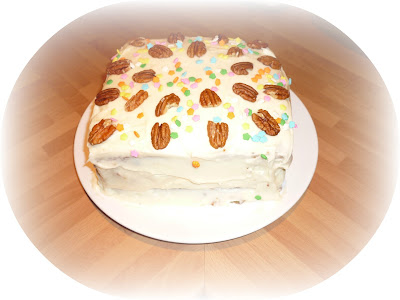 Remember I did my Joining in post, where I admitted to a few WIPs and announced intentions of finishing them in line with Rhondas finish along?  Well, I didnt.  Not a single one.  Didnt ever attempt to to be entirely honest...  I dont know... I just had so much other stuff to do!

Towards the end of last year I was really struggling with no sewing mojo...  Just didnt seem to be able to get anything done.  This year started with mums visit and the two of us spending a few weeks in the cupboard.  Suffice to say my sewing mojo came back in abundance.  But did I remember about my finish along?  Did I bugger, I started half a dozen new, more exciting (to me) things instead.

Of course, this leaves me here at the start of the second quarter with the same wips, and a few more for good measure...  I'm not entirely sure what I should pick for this quarter.  I'm sorely tempted just to list one thing, then I might actually get to join in, do my "finish" and still mess about meantime with new things....  But no, that would be too easy...

So, I still want to finish the Not so hidden Stars. 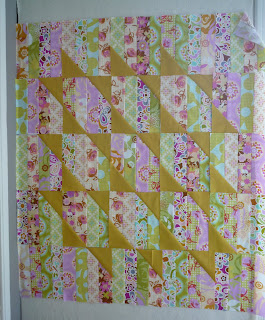 And I still want to do my own bee month (last august!) quilt, so lets aim for having my own two blocks done and the borders on all the blocks...  This was the inspiration mosaic for my blocks.  Still dont know what I'm going to do....

It would also be nice to get Stained II finished, otherwise this QAL could be the longest and slowest in history... 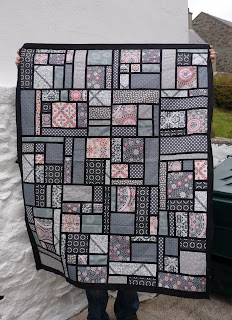 And I think that that is more than enough really, innit?!


Hope you've all had a lovely Easter break and still have room for a wee bit more chocolate.

I have been busy, I have been sewing, I am slowly, slowly clawing my way back to being in control of what I'm meant to be doing.
I dont have much I can share with you yet, but I can show you my Stained II... well, the quilt top is pieced anyway... 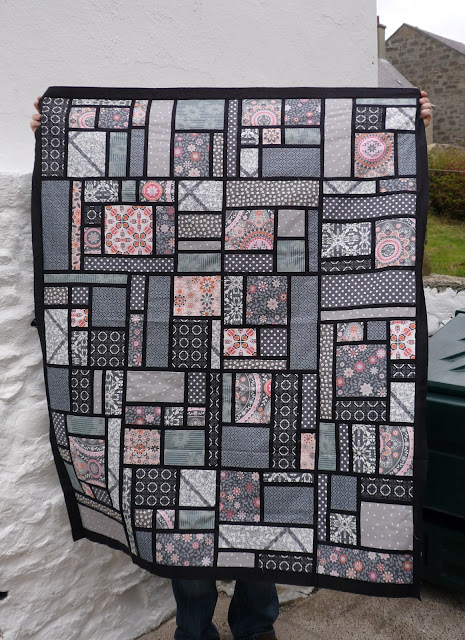 Man has been busy too tidying up the back "garden". He's done a lovely job and its so much cleaner and brighter. I told him that white wall would be ideal for photographing quilts, but he refused to put a couple of nails in the wall for me to hang stuff off. Naturally I shall be making him hold stuff in front of the wall every opportunity I get from now on....