I'm starting to get back a little bit of a sense of routine again, despite really crappy nights, so I'm getting to spend a little more time in my beloved little cupboard.  Got a bit done on the Nicey Jane quilt.

For those of you who don't quilt, this is something I learned called Chain Piecing - basically you don't stop in between pieces you just keep adding to the chain.  Couple of reasons for doing this, first of all its faster and handier, secondly (and this is the technical bit i wouldn't have known about) because you are not stopping and starting with each piece the stitching stays tighter and so you can snip the pieces separate and they wont (shouldn't) unravel so quickly.  I love it as it gets things done faster, and you really get the feeling things are moving along quickly. 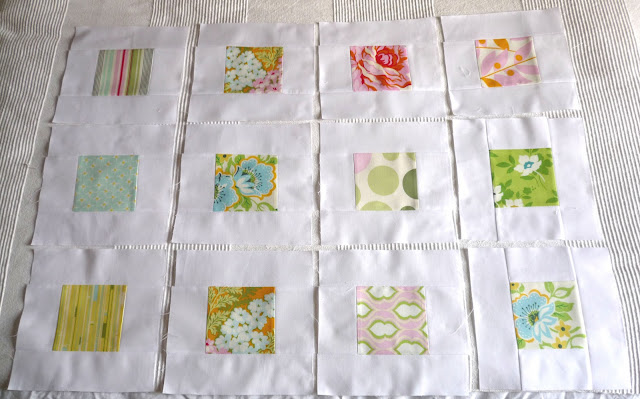 I love this range, and I'm rather fond of these squares as they are!  Might have to get some more for another quilt later...  I can just picture a few more of these, maybe a little larger, with some sashing in between made from wee scraps of the patterned fabric...

Look what I got in the post the today. 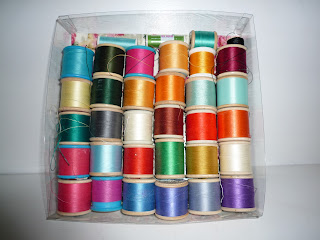 A present from gran, "Oh I just emptied a drawer for you"...  Awesome!  The colours are so gorgeous, I'm tempted to look for a wee box frame and just stick em on the wall like that.  Gran doesn't do Internet, (in fact I'm having trouble convincing her a blog isn't an open door to pure evil!) however I've been making photo books of everything that's come out of the sewing cupboard and sending them on to her.  We were talking the other day about knitting - like me, gran admires knitting, and can do knitting, but considers it far too slow and laborious work compared to sewing.  If you cant knit superfast it just takes forever to see a shape of what you are hoping to make.  When you sew you get instant gratification in seeing your product take shape as soon as you've made your first few cuts into the fabric.  And from my point of view, there's no worrying about dozing off and your head dropping and getting a knitting needle thru your eyeball...

Talking of dozing off, I had a horrible "nap" this afternoon.  Nap sounds like far too pleasant a word...  It was one of those nasty sleeps, when I only sleep for a few seconds but each time I wake I feel it coming again, and again, and again.  Then I feel trapped, its like I'm trying to get up, get out of it, and I wake and go to move but it comes again and I'm just stuck making the same attempt at movement over and over again.   Mind you, that didn't suck half as much as last night.  I woke up and my man wasn't there, and my dopiness lasted long enough for me to actually get up and go downstairs to find out why he hadn't come back to bed yet.  It took a few minutes of standing alone in a dark living room in the middle of the night before I completely came to and realised I'd only dreamt him saying he was going for a drink of water, and that he'd been at sea for almost 2 weeks.

Anyway, I digress, I was supposed to be telling you about Gran.  She was telling me about how she didn't like knitting, so she got a knitting machine!  She used it to make all grampas cardies, all the jumpers for mum and her sisters as they grew up, everything was made on that machine at her table.  "Even if I could still do it, the machine needed the table, it wont attach to the one I've got now."  She said.  So I pointed out that she gave her table to me, didn't she realise that every single thing I've made has been made on that table? 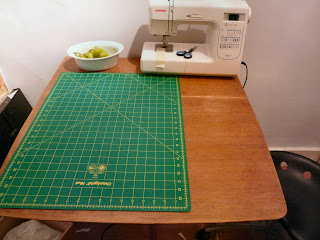 I think she was quite happy with that!

I think I've gotten a bit too ambitious of late, I've joined The Single Girl Quilt Support Group  Well, I thought, looks like a cool quilt to try, and it'll be a bit of a lark making the same quilt at the same time as a few others.  Got the pattern the other day and 'by Timothy!' (I've been listening to too much Paul Temple)...  Each pretty little ring has 31 individual, non-identical, asymmetrical, little pattern pieces.  31!  Took me all today's awake time just to make my templates... 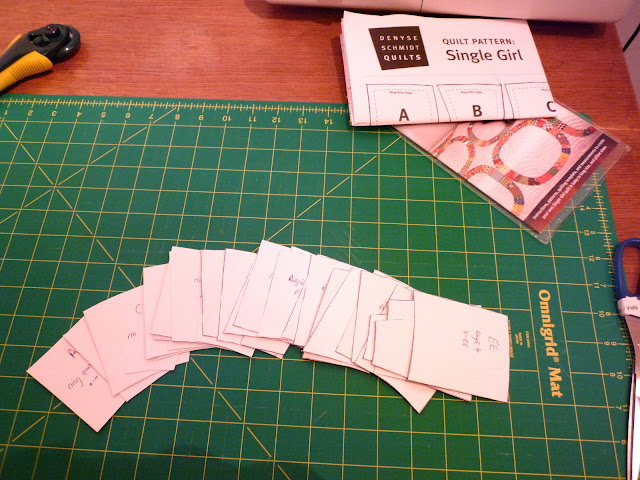 That settles it, if I'm to have a hope in hell of following the same schedule as the others then I'm going to have to stick to the smallest baby quilt version!
Posted by Sarah on 1.2.11